The Theory of Everything - a personal view

Jane and I don’t often get to the cinema these days, but thanks to the good offices of a friend we did get to watch The Theory of Everything last week.  It’s the film based on the memoir of Jane Hawking, wife of physicist Stephen Hawking, Travelling to Infinity (a revision of Music to Move the Stars), neither of which I have read – yet.  Clearly the reason I wanted to see it is because I have a similar sort of Motor Neurone Disease to the professor, although my survival won’t be as long as his since I was diagnosed in my early 50s.

So what did I think of it?  Contrary to expectation, I did not break down in tears or howl – which is strange since it takes very little to trigger off outbursts of embarrassing emotion when I’m watching a remotely romantic or sad scene, as my family will attest.  And the film is emotional, focused as it is on the relationship between the amazing Jane and the remarkable Stephen.  I puzzle as to the reason.  Maybe it’s because I was checking off the familiar symptoms and admiring how accurately Eddie Redmayne (Stephen) had captured them.  It is a truly remarkable performance uncannily capturing, I gather, his mannerisms and his voice (until his tracheotomy).  I recognized the eccentric clumsiness, knocking things on the floor, the tripping over feet, the helpless falling to the ground and being unable to help oneself up.  The alarming choking fits were familiar, as was Jane’s matter-of-fact remedy of thumping between the shoulder blades.  We’re familiar with Jane understanding the inarticulacy of MND and interpreting it clearly for others.  Yes, technically it was brilliant.

I also found Felicity Jones’ portrayal of Jane quite beautiful and, by the real Jane Hawking’s account, very true to life.  In my experience there’s an astonishing strength in MND caring spouses.  As in the film, it is undemonstrative, almost matter of fact.  What the film is unable to show, however, by its very nature, is the emotional toll of the year-on-year care for someone you love who is progressively deteriorating in spite of all your efforts.  It’s possible to debate whether the usual frighteningly rapid types of MND or the exceptional protracted types are easier to deal with, but this truly is a case when comparisons are odious.  Each is equally hard in different ways.  All the film can do is highlight incidents which exemplify the strain imposed on both Stephen and Jane by his illness.  But believe me, being the ill person is easier than being his carer/partner.  The sustained pressure of being sole carer and mother of three growing children beggars belief.

In my view Jane is the hero of the film.  She makes the commitment to love and cherish Stephen in sickness and in health till death parts them, we gather, and sticks to it, despite our and his family’s scepticism.  After an initial diagnosis of two years of life, the marriage in fact lasted thirty years, until it fell apart when an exhausted Jane was replaced in Stephen’s affections by the exciting nurse, Elaine Mason (played by Maxine Peake).  Jane’s close platonic relationship with choirmaster, Jonathan Hellyer Jones (Charlie Cox), in due course ended in reality in their happy marriage.  The film, I gather, exercises some artistic licence with the facts of Travelling to Infinity, but sticks fairly faithfully to the story. 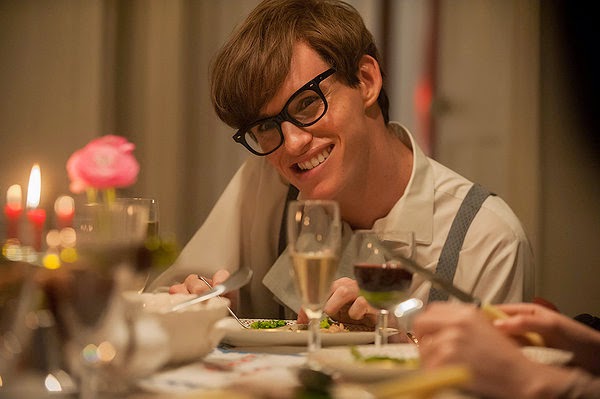 For me a crucial moment was when Stephen had gone to the opera and had a coughing fit, which laid him up in hospital (in fact in Geneva) with pneumonia, while Jane had taken the children camping with Jonathan.  Jane rushes to his bedside where he lies unconscious on life-support.  The doctor faces her with the critical decision: shall he withdraw the life-support?  Now conventional wisdom would say, let him have a merciful release from an undignified life of disabling terminal illness.  The doctor adds that the only way to save him is to give him a tracheotomy (an incision in his throat) meaning he won’t ever be able to talk at all.  For Jane it would have been an easy way out and for Stephen a merciful release.  Whether it is her faith in God or her faith in her husband, she has no truck with the doctor’s advice and refuses to give permission for removing life-support.  Gradually, as we know, he recovered, and went on three years later to publish A Brief History of Time, which gave him his fortune and his international celebrity.  As he says in his answer near the end of the film, “However bad life may seem, there is always something you can do, and succeed at.  While there's life, there is hope.”  Professor Hawking has lent his support to the campaign for assisted dying.  It’s ironic then that, had his wife in 1985 followed that campaign’s logic, he would not still be alive and have the prospect of fulfilling one of his ambitions, to travel in space.

Despite popular myths, I suspect that neither Professor Hawking's determination to fight the disease nor Jane’s care actually served to prolong his survival.  Motor Neurone Disease is implacable, and no amount of will power makes much difference to its course.  The truth is that at diagnosis it’s hard to tell the variant of the disease, and that the average survival is two years.  However there are different sorts, as I’ve indicated.  And it is the passing of time that proves if you are destined to outlive the average.  Clearly giving up hope and receiving poor care would contribute to an earlier demise, but MND marches on whether fast or slowly.

What is the power and the attraction of the film?  I suspect that for most people it is the paradox of the brilliant scientific mind trapped in an increasingly helpless body – and the incredible determination of both central characters that not even the greatest odds should defeat their resolve.  It’s also a love story of course, of a peculiarly poignant kind, or to be more accurate it’s two or three love stories.  Maxine Peake captures an ambiguity in Elaine’s relationship with Stephen, which never has quite the tenderness that Jane demonstrated for him.  There’s admiration for the great man and a hint of professional ownership.  It’s an impressively subtle performance.  Charlie Cox, the fourth in the love story, gives a restrained performance of the widower, Jonathan, which well reflects the tension of his attraction to Jane and his respect for her position as Stephen’s emotional and physical mainstay.  I thoroughly believe the film’s account of the dynamics of the four central characters.

Eddie Redmayne has deservedly won an award for his bravura portrayal of Hawking.  I very much hope that Felicity Jones, in her equally demanding role, receives the recognition she merits.  That gritty determined commitment which constitutes caring for a loved one is far from flamboyant but is heroic.  I hope she receives an award for all the Janes who never get the recognition they deserve, and whom she sensitively and strongly represented.


The film is called The Theory of Everything – the elusive object of Stephen Hawking’s scientific quest.  I’m left wondering whether the meaning of everything isn’t more important and whether Jane hasn’t found it already.
Posted by Michael Wenham at 22:12